Let me tell you about an individual that is Out of This World Over the Top! (but in a good way)
I am talking about none other than Extreme Chef Terry French.  He is considered the Extreme Chef because he beat out many other chefs on the Reality show, Most Extreme Chef.  On that show he had to capture/cook all kinds of weird creatures and cook in some of the most unforgiving environments.

So... I had just arrived at the Convention Center and already had a quick photo op with Bobby Deen.  I went over and picked up my credentials and ventured off into the show.  They started making announcements for the first Cooking Demo with Chef Terry French.  I walked into the Demo area and started getting my camera out.  That is when Extreme Chef Terry French walked right in front of me, looked me up and down, and said, "Hey Brother, make sure if you get pictures of me that I ain't picking my nose or something, only good pics!"  And that was my first run in with Chef Terry.  I stayed and watched the demo... He made an amazing Crab and Avocado Salad as well as entertaining the crowd that showed up for the demo. 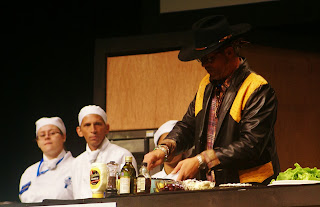 The next day was my chance to interview "The Rebel Chef" Terry.  He had just finished his first interview of the day and I was #2.  We walked around the showroom until he found a booth that had some old fence wood that we were going to use as a background.  I asked him 3 questions and told him to talk about it on camera.  He pulled it off like a champ as you can see in the video below.  He signed an autograph for me and said he would be in touch.  He had to leave a little early to catch a flight to go crabbing...

As he was leaving I learned that he stayed in the same hotel as me and it was his Birthday that day!  Happy Late Birthday Chef Terry!

Skip ahead a few days... I had just posted my interview with Debi and Gabriele from #ExtraVirgin.  I get a tweet from Chef Terry asking for my phone #.  I DM it back.  He calls and starts asking where his interview is, that I chose the beautiful girl from Brooklyn over him. (I had already started editing his interview)  I was starting to get worried that I  had actually pissed off the Chef. (See, I was just trying to build up to my Paula Deen Post, and he was second in that climax building)  He then says, "Hey, I'm just kidding with ya, but I've got a lot of things coming up and just want to make sure I have your contact info.  We talked about a few things that he has coming up, he invited me to a few events coming up. (Mind you, Chef is a colorful character and likes to use VERY COLORFUL language that I wont use here)  Now that I look back on it, it was hilarious!  Thank you Chef!

I have to tell you about this story though.  Okay, Chef and I are staying in the same hotel, (So was another co-worker of mine but didn't know it at the time) and there is a fire alarm at 2AM.  Chef is still up partying like an animal since it was his birthday and I sleep right through it and had no clue.  Turns out "Party Chef" had a hot tub full of beautiful women singing him Happy Birthday!  Man.... I always miss the fun. 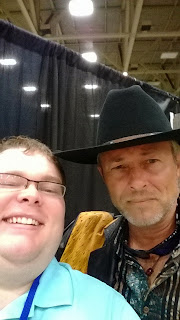 Chef, I can't wait til the next time you are in Dallas, I am going to take you up on your offer to go get in trouble!

If you ever get a chance to meet The Rebel Chef in person... do it!  You can see where he will be appearing next on his website: www.ChefTerryFrench.com or follow him on twitter at www.Twitter.com/Chef_French Check back here often because Chef Terry has some awesome opportunities coming up and he promised that we could come along for the ride!

See more pictures of Chef Terry French at www.facebook.com/TeeJayToday and on his website... tell him TeeJay sent ya!
Posted by SeekerBug at 5:08 AM No comments: Links to this post

Debi Mazar & Gabriele Corcos from #ExtraVirgin on The Cooking Channel

I recently had the blessing to attend an event by @MetroCooking in Dallas as one of the Blogger/Media people.  I had a blast, but the most memorable part was being part of an interview with Debi and Gabriele.  They are 2 of the most sincere and talented people I have had the pleasure of meeting. 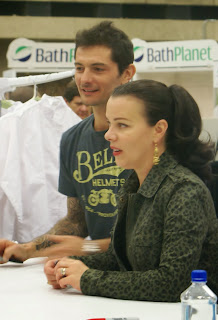 This is how the day went:

I was told to be at the event at 11AM so that another Blogger/Media person and I could be taken to a make shift interview room to ask a few questions.  Stacy and I got together to make sure that we were not going to ask the same questions... we both planned to ask just 2 questions each.  Another Media personality joined us but did not share like we did.
Everyone started to get set, it was 10 minutes until showtime for us... I had my big Sony camera ready, my HD camcorder was ready also.  The big media people had their cameras set up... We were ready.
That is when we got the news... Something was holding them up and we would only have time for one question each.  OH NO!
We were worried that the press was going to be shoved to the back burner because Debi and Gabriele had to be on stage at a certain time and we knew that we could not hold up that public event.  Thousands of people would be upset if they were late.
After what felt like an eternity (it was only a few minutes in reality) the stars walked into the room and being the professionals that they are, were ready to go immediately with the questions.
They were putting their things away as Debi says, "Where is Joe that is here to interview us today?  (no one answered) The guy that was talking to us on twitter last night and this morning?  THAT WAS ME!  I was the guy they knew about over the other media people there that are way more popular than me!  I felt an immediate connection between them and me!
The first interviewer went and it felt like they took longer than they should, but everyone feels that way when you are next and everyone is on a TIGHT schedule.  It was finally the bloggers' turn.  As Debi was looking at me with a very warming and inviting smile, all I could mutter out was, "Tell me about your book."  (You can see what happened from there in the vid below)

I was so thankful that Debi and Gabriele are REAL people, the answers they gave me made me feel like they are just a regular family!  They really do care about raising strong independent daughters and they are very proud of it.
My absolute favorite part was during the interview, one of the handlers that makes sure everyone gets to the right place on time, swirled her finger in a circle signaling that we need to wrap things up.  Debi tells them to stop swirling her finger at her, she was going to thoroughly answer our questions.  I gained so much respect for Debi and Gabriele in that moment it is unreal.
After they got off stage and did their cooking demo, I caught up with them to snap a quick picture and to get an autograph, which they happily did.
I was leaving, they were still signing autographs, I waved to them... they both stopped what they were doing to wave back, say Thank You and Gabriele yelled "CIAO!" over the line of eager people awaiting an autograph.  For a second I felt like the celebrity as everyone turned to see who had their attention, and it was little ole TeeJay Today! 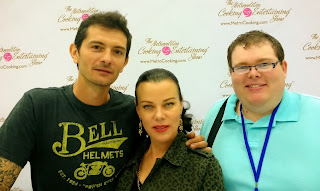 Get with your cable provider to check out their show on The Cooking Channel, it is called Extra Virgin.  They also have a Cookbook coming out, a beauty line, and olive oil coming to a store near you soon!

Thank you to Sabra, Jill, Stacy, and MetroCooking!

I have some more great articles coming from this event (Paula & Bobby Deen, Jason Roberts,  Extreme Chef Terry French, the Vendors and Food!)